Amateur Chinese inventor, Tao Xiangli, has built his own homemade submarine. Drawing inspiration from the James Bond and Terminator movies, Xiangli's tinkering is quite impressive, considering his education came to a halt at the fifth grade. 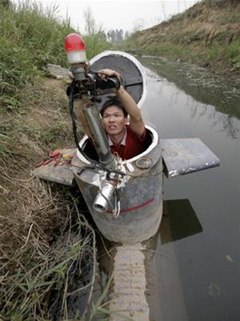 In The Guardian's video piece on the charming inventor, Xiangli says his friends and relatives
consider him crazy, and deem his venture "an unrealistic fairy tale."

According to China Daily, "...Tao's fully functional submarine has a periscope, depth control tanks, electric motors, manometer, and two propellers, from old oil barrels and tools which he bought at a second-hand market. He took 2 years to invent and test the submarine which costs 30,000 yuan (US$4,385)."

Want to master Microsoft Excel and take your work-from-home job prospects to the next level? Jump-start your career with our Premium A-to-Z Microsoft Excel Training Bundle from the new Gadget Hacks Shop and get lifetime access to more than 40 hours of Basic to Advanced instruction on functions, formula, tools, and more.

Other worthwhile deals to check out:

Join the Next Reality AR Community

Get the latest in AR — delivered straight to your inbox.

Thats 5 dollars he probably got it from allowence when he was in 4th grade.

By dropout, they mean he had to drop out of school probably to go work to provide money for his family. Thumbs up! Good job! very impressive for someone with no engineering knowledge.